AT Legend Carolann Cormier Will Retire

For the past 36+ years, Carolann Cormier has worked as a speech-language pathologist (SLP) and an expert in assistive technology (AT) and augmentative and alternative communication (AAC) throughout the state of Connecticut. Since 1995, Carolann’s career has spanned many different work environments, including public schools, summer camps, the Department of Developmental Services (DDS), children’s hospitals, colleges and the Capitol Region Education Council (CREC). Carolann has presented nationwide, has also published numerous professional articles and written a guide to AT for students with Autism. She has also accomplished so much professionally, having earned a variety of advanced degrees and certifications. However, Carolann’s professional success is far greater than the sum of its parts: It’s her positive influence on students and families that is the true mark of her personal and professional legacy.

There are many professionals and families that can attest to the positive impact Carolann has had on their lives. Anne Selavka story encapsulates this positive impact succinctly.

Anne has twin boys, one of whom – Greg – was born with significant support needs and also had complex communication needs. As Greg was aging out of birth-to-three, Anne received a report from a professional that indicated Greg would never speak or be able to use assistive technology. Anne was referred to a local children’s hospital where she met Carolann. Like Anne and her family, Carolann refused to believe the report and focused instead on Greg’s potential. Since then, Carolann has not only been a tireless advocate for Greg, but a member of his family. Carolann could easily see Greg’s potential and has worked with Greg and his teams throughout the years to help support him. Anne credits Carolann with “opening up Greg’s world.”  Anne says that Greg’s ability to communicate with his family and friends, to bake, to access his community and to experience a positive quality of life can all be attributed to Carolann’s unshakeable advocacy. Carolann helped to give Greg and his family hope that he would reach his potential, even when times were bleak. Greg is 28 years old now, and even though Carolann has not worked with him and his family in a professional capacity for years, her relationship with them has continued, as has her advocacy. Anne wonders where they would be today if Carolann hadn’t come into their lives, and considers they are “lucky to have found her.” 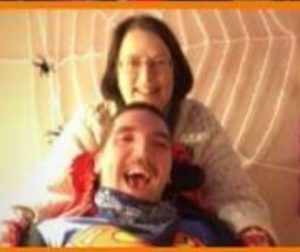 The Selavka’s story is just one of many. From Carolann’s direct work with students and families, to her trainings of professionals to build their capacity in AT, to her workshops and to her thoughtful late-night email responses to colleagues, the impact of Carolann’s work on the lives of people with disabilities is immeasurable. When asked why she went into the field of AT, Carolann said that she had met so many people who could not use speech to communicate and desperately wanted to help them because she knew that they could communicate in some way. She was thrilled to be a part of what was then the emerging field of AAC because it brought communication to people who previously could not communicate. Carolann says the most rewarding part of her career has been when she “sees the light bulb go on” in her students. There is nothing better than seeing a student with learning disabilities or with complex communication needs, successfully communicate with a new AT device. “Their look of accomplishment” has driven Carolann’s resolve to pursue solutions because her students’ success is her greatest reward.

While Carolann plans to continue working part-time, she will be officially retiring at the end of the 2019/2020 school year. Please join CREC and the CTTAP community to congratulate Carolann on her illustrious career, and thank her for her tireless dedication, passion and advocacy for students with disabilities and their families. Carolann, you are irreplaceable and will be sorely missed.