Working Together to Support Independence

In the Spring of 2019, Connecticut’s State Department of Education, Bureau of Special Education, made available an opportunity for one-time funding for “Individuals with Significant Cognitive Disabilities.” Eastford Public Schools, in collaboration with EASTCONN’s Woodstock Academy Cooperative, proposed and received an award to further independence in an Eastford student, along with her peers in the program, and to improve their Activities of Daily Living (ADL) skills. One facet of the program added the support of EASTCONN’ S Occupational Therapy and Assistive Technology professionals, first to identify tools and resources to support independent performance; and second, to embed training and consultation to support both staff and students in strategies and practices that support increased independence in ADL’s. 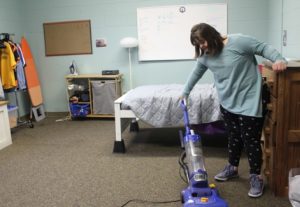 EASTCONN’s staff worked with the team to identify skills to be incorporated into the program: making a bed; laundry, including sorting; use of the washer and dryer; folding and hanging clothes; vacuuming and cleaning routines; hygiene; dressing; and meal preparation, including following recipes and cooking. Grant funding was used to establish an independent living room and to purchase specialized adaptive equipment to support skill development and independence in project activities. The independent living room allows students to practice independent living skills tasks on a daily basis, such as the vacuuming and folding tasks pictured below. These and other daily living activities are supported and reinforced through the use of an iPad for learning new tasks, such as videos, and step-by-step visual supports.

The iPad has also enabled students to be more independent in their meal preparation tasks through the use of text-to-speech and step-by-step directions for recipes in apps, such as Storybook Creator. The adaptive cooking equipment has increased students’ ability to manage a variety of tasks needed for meal preparation in a more independent, efficient and safe manner. See the illustration below where students are working on a Smoothie recipe. Directions are provided with visual and auditory support on an iPad. If necessary, the blender can be operated by using a switch, which allows students of all abilities to participate. 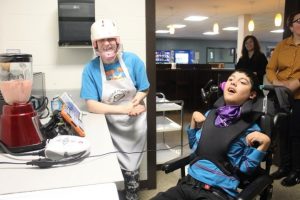