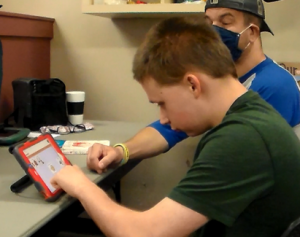 The TouchChat app was recently trialed through EASTCONN’s AT Lending Library by Chris, a transition-age student with Autism Spectrum Disorder. Several AAC options were ruled-out prior to Chris’s device trials, after matching specific software design features to his abilities and needs. For example, Chris had demonstrated his ability to make requests to meet his needs and he had a large, receptive vocabulary. Yet, he was often impatient, so he benefited from automatic navigation and grammar guidance to produce full sentences quickly. Trials began with Chris observing the examiner using an 8-inch dynamic display, speech-generating device (SGD) with synthesized voice-output running research-based AAC software, called TouchChat. TouchChat is designed and manufactured by Saltillo for individuals who need efficient access to a robust vocabulary with a mix of single words, phrases and complete sentences. It is an app for iOS only, not Android devices. Chris’s support coach said he needed the smaller size of the 8-inch iPad, as compared to his current, 10-inch SGD. Chris enjoyed using the custom messages in the About Me page to express how he liked ketchup and other favorites. He quickly demonstrated the ability to imitate a model, and even learned to sequence three buttons independently to express, “I want to play music.” As a result of Chris successfully trialing several assistive technologies and devices, his school district could determine which device would best meet his needs.